I think I've recouperated from my Swedish adventure, just not sure if I'll ever get used to a life working full time. Ugh. Getting up each morning at 7, doing the same louzy job each day, the cash on my bank account is whispering yarny thoughts to me... No, I need to save some for the Lowlands festival that's going to be in less than three weeks.

On the knitting front I've made little progress on any of my existing projects. I did start knitty's 'branching out' shawl with some lovely silk/merino. Since my camera is broken and in repair I can't take any pictures. Ugh. I want to knit more.

I allmost did something stupid last weekend. Not anything knitting related. Real life stupid and I can't seem to get it out of my mind. I can't discuss it here and I can't see how I got myself into this situation. Drinking is not good for me.
Gepost door Jenneke op 09:41 1 opmerking:

After the two weeks I had with 15 scouts in Sweden I can only say that I survived and I won't ever do it again. We were at a Jamboree where I felt like I was doing slave labour. Up from 6.30 in the morning till 1 in the night. Running around for the kids, trying to motivate them to participate in the boring programme with too much reflection time. I've had just about an hour to myself over the whole week to write an e-mail to my parents and take a shower. Yes, that is one shower in a week of surprisingly good weather. And when you think you've had it all... home sickness. Three kids that were crying all the time. I did not feel the Jiingi spirit.

I had very little time to knit, except for during the boring obligatory ceremonies and shows. They were in Swedish so the 2000 international guests could not follow anything that was said. I'm so pissed off about that. We travelled for 20 hours on a freaking bus to get ignored by the organisation. Thereby, everything that was translated in English at the activities was so poorly translated that I could point out the errors in the translation. They surely didn't have a native speaker to check their translations and to make the texts understandable for kids that are not native speakers. I did have some fun though and the kids were happy most of the time. I need to hang on to those feelings and get rid of the irritation. Here are some happy knitting pictures.

Me knitting during the closing ceremony which wasn't all bad. The Swedish king made a great speech, partly in English for the international guests. That was great. The music wasn't bad either. Me knitting in the train to Stockholm. Hi everyone! I'll be at scouting Camp in Rinkaby Sweden till july 28th! Don't worry, I'll have some knitting with me!
Gepost door Jenneke op 01:56 Geen opmerkingen:

i might have the most boring, least interesting job in the world

At least I can listen to podcasts when I'm working. At least I can think about knitting when I'm going through ancient building permits (that fence from 1986 is probably not there anymore. Why keep the file?)

edit: And I seem to have lost my knitting mojo. Seriously, I watched Frost tonight without knitting in my hands. I need a day off.
Gepost door Jenneke op 08:44 Geen opmerkingen:

I can hardly believe it myself but I managed to get a job today. It's only for four months to begin with, but still. A job.

Do you know what that means? I'll have 45 hours a week less knitting time than I have now! Sigh. I'll never get those socks and sweaters done. But I will have some money in the end... To celebrate I visited a yarnstore in Amsterdam, De Afstap, and bought some pretty things. On the left: 3 skeins of Kid Silk Haze to make the beautifull Kiri pattern. This yarn is so pretty and soft! I hope to get working on this shawl after the mystery stole (Clue one is all finished up, clue 2 is just out!). On the right Rowan Bamboo Tape. Very nice and soft. I'm really curious as to how this yarn will knit up I got the Tori (below) pattern with it and I think I'll make it. It looks really pretty. 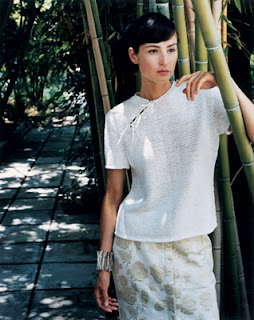 A picture says more than a thousand words I love them. They feel great and the color is awsome. I think my Sockapalooza pal is going really going to enjoy these soft, luxurious socks.
Gepost door Jenneke op 05:45 Geen opmerkingen:

I'm getting closer and closer! Just 10 more rows and I'll get to start the toe. I love toes.

The stole is knitting up nice. Do you see the lifeline I've put into it? Smart, right?
Gepost door Jenneke op 04:22 Geen opmerkingen: